by Bianca and Naomi Sanchez

Recently, in the small population that is our mother’s Facebook, college has been a controversial topic. My sister and I thought, as a current and future college student, it was time our voices were added to the conversation. As a disclaimer, these are our individual experiences and opinions, supported by some statistics. We are not trying to change people’s opinion, or judge people for their decisions. We know that college is not meant for everyone, but we do think it is meant for us!

WHY I’M AT COLLEGE?

I had been anxiously awaiting an email from my top school choice, Northwestern University. At 5:29 PM, I was sent that email. My parents and sister knew I was expecting it, but I wanted this moment to myself.

So I took a cookie, I think it was a Samoa, and walked to my room. I took a moment to

and went through a series of webpages, until I read the one word I had been waiting for Congratulations! 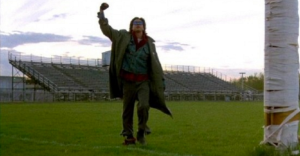 You know in The Breakfast Club, when Bender is caught in the freeze frame with his arm in the air? When the music swells, and everyone in the audience feels triumphant?

Well, I was Bender.

Then over the summer I began applying for student loans.

At Northwestern tuition is mad steep. You can go ahead and look it up. Even after receiving more than half in scholarships and grants I was still left with a sum to pay. I remember what my Dad told me when we sat down to make the first payment.

“This is an investment in your future”, he said.

People should invest in whatever future they see for themselves.

For myself, I envision a future as a writer. I feel like God has given me this gift. And, has prepared me for a profession where I can illuminate the stories of people almost never seen. I know that my best chance at succeeding in this field involves me getting a degree. And, Northwestern has the top journalism school in the country – Medill.

Attending University also allows me to learn and hear from people who have different opinions than my own. It allows me to find and develop my own voice, by rooting out the best chunks of the slew of voices, I am exposed to. I would never want to be locked in a homogenous bubble of same opinions, same beliefs, and same identities.

It helps that Northwestern is working to reduce the amount of loans student take out to a maximum of $20,000 over the four years, which is showing of real progress in making education less of a burden.

However, I still know for some people college may not be a part of their future. They may not envision it, and that is completely okay.

If you want to pursue a career at home? Great, best of luck! Want to make sure you are home to bake cookies for your kids? Huzzah, I can’t cook whatsoever, I applaud you! If you want to go to school part-time and raise you kids! All power to you! Do your kids have to pop a frozen pizza in the oven? Better make sure it’s Home Run Inn, that’s the best!

As Shailene Woodly says, “you do you. Let she, do she. And let me, do me.” Don’t get down on other people for their choices.

I am aware I will be paying off these loans for a while, man – I already started. But I also know in the end this is a small cog in a giant grandfather clock. It will all work in time.

WHY I WANT AND WILL GO TO COLLEGE

“Education is the most powerful weapon, which you can use to change the world”

As usual, my classmates and I (Including my very congenial teacher, Mr. Bertenshaw) had a discussion regarding it. All my classmates had a distinct definition of what education is. After much deliberation, we all came to one concurred thought; Mandela couldn’t be more right.

I want to take advantage of the weapon that was given to me and carve out a changed future. College is a way for me to do so. Although this path may not be for everyone, it is the path for a lot of people.

I want to be a veterinarian someday, to treat all God’s awesome creatures. To do this I want to go to UCD (University College Dublin), one of the top undergraduate veterinary schools in the world, and couldn’t be more excited about it. In 5 years and at $46,150 a year (not including money from scholarships), I will get my MVB –Veterinary Medicine Bachelors Degree. “How will you pay off your future loans?” you may ask, well I plan on doing so with the $87,590 I’ll be making a year (United States Department of Labor).

We need people to go to college. With out them who will be our doctors, our lawyers, our politicians, our dentists, our policemen, our entrepreneurs, our journalists, our veterinarians and most importantly our teachers? All these careers require some sort of college level degree.

Both my parents went to college. They also didn’t grow up with the sunnier side of money. Yet, they still knew that college was the way for them to do what they want and to succeed at it. My parents both graduated with a masters in education degree (actually my mom has two), which usually cost a ton of money. But, thankfully, they both practically received full rides for their Masters Degrees. But because of their college choices, they are able to pay of their loans by getting a great paycheck every 2 weeks. (Fact: the median Chicago teacher makes $71,017 a year compared to the median household income which is $46,877, Washington Post, 2012.)

Others will put words in my mouth and say that I’m probably neglected and get no attention from my parents, but I beg to differ. I love my parent’s more than anything in the entire universe (that includes my Starbucks cotton candy Frappuccino.)

Every morning I get the extreme pleasure of spending an hour driving to and from school with my mom and sister. In the car we listen to worship music, but we also jam to some old hits like Pearl Jam or new hits like Justin Bieber. We also engage in serious conversions about random topics, inevitably, we argue and get into it every so often, but because of the close relationship with my mom, we can get over it and laugh about it later. Then, I get home and hang out with my daddy-o, we talk about crazy philosophical theories and catch up on hilarious jokes. Then after dinner, we enjoy a great sports game or Wheel of Fortune (where my brother Nate-Dog is cheering on the soccer team Arsenal or my mom is yelling at Pat Sajak.) I then do some homework and watch some new episodes of some shows. Then, before we go to sleep-every single night, we all come together in the living room (including my doggy) and pray for another beautiful day together.

I might not spend every second with my parents, but I won’t lie, I love having alone time and love getting a rigorous education at school. I also love that my parents made the choice to go to college and aspired to do what makes them happy. Education is a weapon and they are using it. They are not a Devastation. They are an Inspiration.